It is possible to run a whole virtualized guest system entirely on top of QEMU's 9p pass-through filesystem (Documentation/9psetup) such that all guest system's files are directly visible inside a subdirectory on the host system and therefore directly accessible by both sides.

This howto shows a way to install and setup Debian 11 "Bullseye" as guest system as an example with 9p being guest's root filesystem.

Roughly summarized we are first booting a Debian Live CD with QEMU and then using the debootstrap tool to install a standard basic Debian system into a manually mounted 9p directory. The same approach can be used almost identical for many other distributions, e.g for related .deb package based distros like Ubuntu you probably just need to adjust the debootstrap command with a different URL as argument.

There are several advantages to run a guest OS entirely on top of 9pfs:

In this entire howto we are running QEMU always as regular user. You don't need to run QEMU with root privileges (on host) for anything in this article, and for production system's it is in general discouraged to run QEMU as user root.

First we create an empty directory where we want to install the guest system to, for instance somewhere in your (regular) user's home directory on host.

At this point, if you are using a filesystem on host like btrfs or ZFS, you now might want to create the individual filesystem data sets and create the respective (yet empty) subdirectories below ~/vm/bullseye (for instance home/, var/, var/log/, root/, etc.), this is optional though. We are not describing how to configure those filesystems in this howto, but we will outline noteworthy aspects during the process if required.

Next we download the latest Debian Live CD image. Before blindly pasting the following command, you probably want to check this URL whether there is a younger version of the live CD image available (likely).

Boot the Debian Live CD image and make our target installation directory ~/vm/bullsey/ on host available to the VM via 9p.

You should now see the following message:

Now start any VNC client of your choice on your workstation and connect to localhost. You should now see the Debian Live CD's boot menu screen inside your VNC client's window. 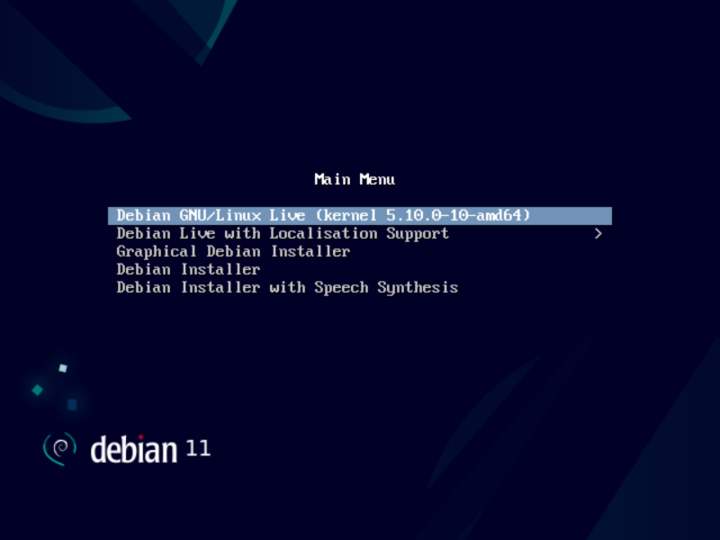 From the boot menu select "Debian GNU/Linux Live". You should now see the following prompt:

Which tells you that you are in a shell with a regular user named "user". Let's get super power (inside that Live CD VM):

Next we need to get the debootstrap tool. Note: at this point you might be tempted to ping some host to check whether Internet connection is working inside the booted Live CD VM. This will not work (pinging), but the Internet connection should already be working nevertheless. That's because we were omitting any network configuration arguments with the QEMU command above, in which case QEMU defaults to SLiRP user networking where ICMP is not working (see Documentation/Networking#Network_Basics).

If you are using something like btrfs or ZFS for the installation directory and already subdivided the installation directory with some emtpy directories, you should now fix the permissions the guest system sees (i.e. guest should think it has root permissions on everything, even though the actual filesystem directories on host are probably owned by another user on host).

Now download and install a "minimal" Debian 11 ("Bullseye") system into the target directory.

Ignore those warnings. The debootstrap process might take quite some time, so now would be a good time for a coffee break. Once debootstrap is done, you should see the following final message:

Now you have a minimal system installation. But it is so minimal that you won't be able to do much with it. So it is not yet the basic system that you would have after completing the standard Debian installer.

So let's chroot into the minimal system that we have so far, to be able to install the missing packages.

Important: now we need to mount a tmpfs on /tmp (inside the chroot environment that we are in now).

If you omit the previous step, you will most likely get error messages like the following with the subsequent apt commands below:

Let's install the next fundamental packages. At this point you might get some locale warnings yet. Ignore them.

We need a kernel to boot from. Let's use Bullseye's standard Linux kernel.

Select the time zone for the VM.

The basic installation that you might be used to after running the regular Debian installer is called the "standard" installation. Let's install the missing "standard" packages. For this we are using the tasksel tool. It should already be installed, if it is not then install it now.

The following simple command should usually be sufficient to install all missing packages for a Debian "standard" installation automatically.

For some people however the tasksel command above does not work (it would hang with output "100%"). If you are encountering that issue, then use the following workaround by using tasksel to just dump the list of packages to be installed and then manually install the packages via apt by passing those package names as arguments to apt.

Before being able to boot from the installation directory, we need to adjust the initramfs to contain the 9p drivers, remember we will run 9p as root filesystem, so 9p drivers are required before the actual system is starting.

The previous update-initramfs might take some time. Once it is done, check that we really have the three 9p kernel drivers inside the generated initramfs now.

Let's set the root password for the installed Debian system.

Alternatively you could of course also configure it by adding an entry to /etc/fstab instead, e.g. something like:

Yet another alternative would be to configure mounting tmpfs from host side (~/vm/bullseye/tmp).

This tmpfs on /tmp is currently required to avoid issues with use-after-unlink patterns, which in practice however only happen for files below /tmp. At least I have not encountered any software so far that used this pattern at locations other than /tmp.

Installation is now complete, so let's leave the chroot environment.

And shutdown the Live CD VM at this point.

You can close the VNC client at this point and also close the VNC SSH tunnel (if you had one), we no longer need them. Finally hit Ctrl-C to quit QEMU that is still running the remainders of the Live CD VM.

Run this command from host to boot the fresh installed Debian 11 ("Bullseye") system with 9p being guest's root filesystem:

To speedup things you can also consider to use e.g. cache=loose instead. That will deploy a filesystem cache on guest side and reduces the amount of 9p requests to hosts. As a consequence however guest might not immediately see file changes performed on host side. So choose wisely upon intended use case scenario. You can change between cache=mmap or e.g. cache=loose at any time.

Another aspect to consider is the performance impact of the msize argument (see Documentation/9psetup#msize for details).

Finally you would login as user root to the booted guest and install any other packages that you need, like a webserver, SMTP server, etc.