From QEMU
(Redirected from SPARC)
Jump to: navigation, search

Welcome to the SPARC homepage. This page contains news and resources for users looking to emulate sun4m, sun4u or sun4v systems under QEMU.

The table below gives the status of the SPARC machines available in QEMU and is correct as of the latest release:

Users should install the qemu-system-sparc package in order the use the SPARC system emulators provided by their distribution.

Changes to sun4u machine from 2.11 onwards

In order to improve the compatibility of QEMU's sun4u machine, there have been a number of changes that have been made during the 2.11 development cycle which in some cases will require changes to the command line to start qemu-system-sparc64.

Many OSs either don't have drivers for other network cards, don't build other network cards for SPARC architecture or even have faulty drivers because they have never been tested on big-endian machines. Implementing the real onboard sunhme enables networking for just about every OS.

In order to support this topology QEMU included some hacks to enable PCI devices to be connected directly to the sabre PCI bus and re-work the interrupt routing. Typically this is visible during Linux boot as a set of warnings about overlapping PCI window ranges, and it is up to the OS to attempt to resolve the clashes itself.

By correctly modelling these bridges, the PCI topology and interrupt routing are now implemented correctly as per the available documentation which removes all visible guest OS warnings in my tests and allows these hacks to be removed.

IMPORTANT: as it is now impossible to plug PCI devices into the sabre PCI bus then it is necessary to make a slight change to the command line used to plug additional PCI devices into QEMU.

Note that the important part of the -device parameter is the bus=pciB which ensures that the virtio-blk-pci device is plugged into the correct simba bus.

If by accident this is omitted (as typically when using QEMU <= 2.10) then QEMU will exit with a message similar to the following:

The tables below show the results of testing various SPARC and SPARC64 guests in QEMU in the latest release:

SPARC emulation is gradually improving over time and newer versions of QEMU will run significantly better than older ones. For more detailed information, check your QEMU version against the table below:

This page details how to set up a basic Debian SPARC image in QEMU.

Artyom has contributed several patches to improve SPARC emulation under QEMU and has lot of related information, particularly for users trying to run Solaris images under emulation. Some of the content is a little out of date (OpenBIOS should work with practically all Solaris versions now) but the FAQ is very helpful indeed.

Torbjörn uses QEMU to build and test the GNU GMP libraries on various platforms, and while the information is a little out of date, there are some useful configurations listed on the page.

This page contains a description of how to take an SS-20 Solaris image from a physical machine and run it under QEMU.

Olivier Danet has implemented a sun4m machine in an FPGA which is capable of booting many SPARC32 OSs, and as a consequence has provided several patches to fix bugs in SPARC32 emulation (and also OpenBIOS) 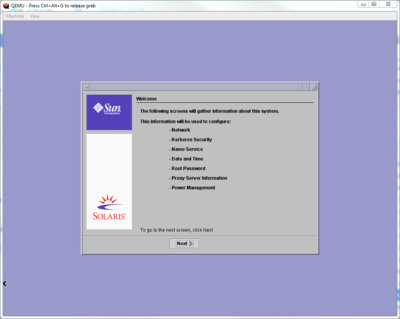 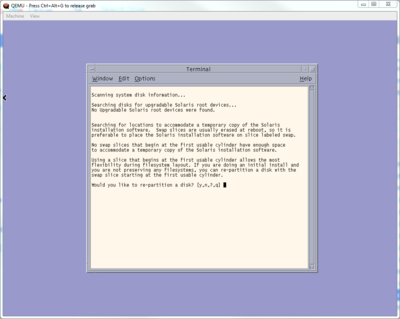 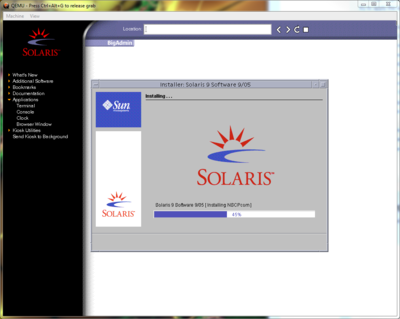 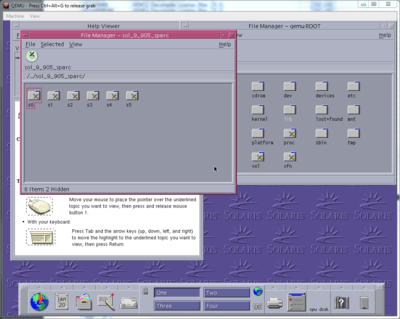