There are two parts to networking within QEMU:

There are a range of options for each part. By default QEMU will create a SLiRP user network backend and an appropriate virtual network device for the guest (eg an E1000 PCI card for most x86 PC guests), as if you had typed -net nic -net user on your command line.

Note - if you specify any networking options on the command line (via -net or -netdev) then QEMU will require you to provide options sufficient to define and connect up both parts. (Forgetting to specify the backend or the network device will give a warning message such as "Warning: netdev mynet0 has no peer", "Warning: hub 0 is not connected to host network" or "Warning: hub 0 with no nics"; the VM will then boot but will not have functioning networking.)

Note - if you are using the (default) SLiRP user networking, then ping (ICMP) will not work, though TCP and UDP will. Don't try to use ping to test your QEMU network configuration!

Note - As this page is probably very brief or even incomplete you might find these pages rather useful:

How to create a network backend?

In most cases, if you don't have any specific networking requirements other than to be able to access to a web page from your guest, user networking (slirp) is a good choice. However, if you are looking to run any kind of network service or have your guest participate in a network in any meaningful way, tap is usually the best choice.

This is the default networking backend and generally is the easiest to use. It does not require root / Administrator privileges. It has the following limitations:

User Networking is implemented using "slirp", which provides a full TCP/IP stack within QEMU and uses that stack to implement a virtual NAT'd network.

A typical (default) network is shown below. 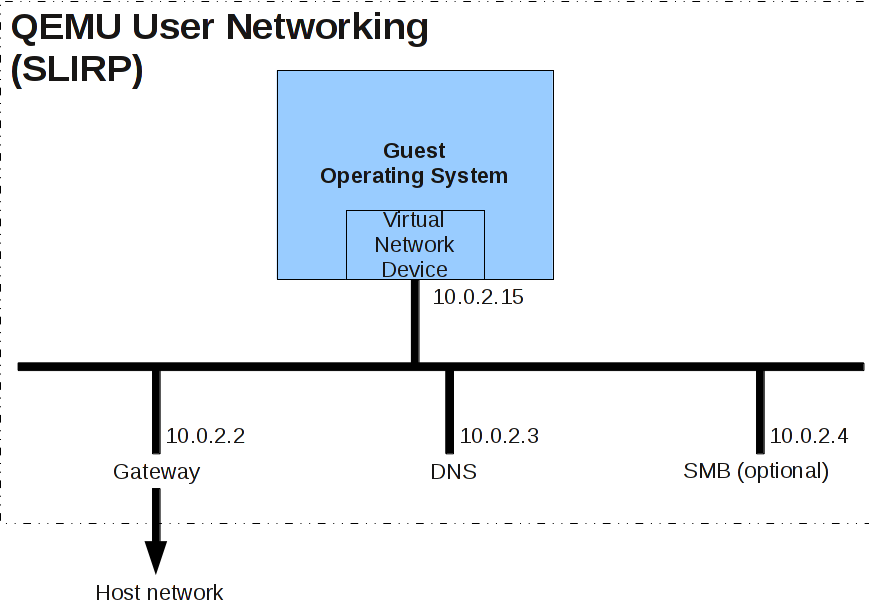 Note that from inside the guest, connecting to a port on the "gateway" IP address will connect to that port on the host; so for instance "ssh 10.0.2.2" will ssh from the guest to the host.

Enabling ping in the guest, on Linux hosts

For example, as root,

The -netdev user parameter has some more useful options:

The tap networking backend makes use of a tap networking device in the host. It offers very good performance and can be configured to create virtually any type of network topology. Unfortunately, it requires configuration of that network topology in the host which tends to be different depending on the operating system you are using. Generally speaking, it also requires that you have root privileges.

The VDE networking backend uses the Virtual Distributed Ethernet infrastructure to network guests. Unless you specifically know that you want to use VDE, it is probably not the right backend to use.

The socket networking backend allows you to create a network of guests that can see each other. It's primarily useful in extending the network created by the SLIRP backend to multiple virtual machines. In general, if you want to have multiple guests communicate, the tap backend is a better choice unless you do not have root access to the host environment.

How to create a virtual network device?

The virtual network device that you choose depends on your needs and the guest environment (i.e. the hardware that you are emulating). For example, if you are emulating a particular embedded board, then you should use the virtual network device that comes with embedded board's configuration. Such on-board NICs can be configured with the -nic option of QEMU. See the corresponding section below for details.

On machines that have a PCI bus (or any other pluggable bus system), there are a wider range of options. For example, the e1000 is the default network adapter on some machines in QEMU. Other older guests might require the rtl8139 network adapter. For modern guests, the virtio-net (para-virtualised) network adapter should be used instead since it has the best performance, but it requires special guest driver support which might not be available on very old operating systems.

Use the -device option to add a particular virtual network device to your virtual machine:

The netdev is the name of a previously defined -netdev. The virtual network device will be associated with this network backend.

Note that there are other device options to select alternative devices, or to change some aspect of the device. For example, you want something like: -device DEVNAME,netdev=NET-ID,mac=MACADDR,DEV-OPTS, where DEVNAME is the device (e.g. i82559c for an Intel i82559C Ethernet device), NET_ID is the network identifier to attach the device to (see discussion of -netdev below), MACADDR is the MAC address for the device, and DEV-OPTS are any additional device options that you may wish to pass (e.g. bus=PCI-BUS,addr=DEVFN to control the PCI device address), if supported by the device.

Use -device help to get a list of the devices (including network devices) you can add using the -device option for a particular guest.

In case you don't care about configuring every detail of a NIC, you can also create a NIC together with a host backend by using the -nic parameter. For example, you can replace

Use -nic model=help to get a list of the supported NIC models.

If you don't care about the NIC model, you can also omit that option. So the shortest way to get a tap device is for example simply:

The NIC option should also be use to configure NICs on embedded systems (which can not be used via -device). For example, to connect such an on-board NIC to the tap backend and change its MAC-address, you can use the -nic option like this:

You can monitor the network configuration using info network and info usernet commands.

You can capture network traffic from within QEMU using the filter-dump object, like this:

Once you've shut down QEMU, you can examine the dump.dat file with tools like Wireshark. Please note that network traffic dumping can only work if QEMU has a chance to see the network packets, i.e. this does not work if you use virtio-net with vhost acceleration in the kernel.

A simplest way is to forward a specific host port to guest port 22. It can be done via:

The first line creates a virtual e1000 network device, while the second line created one user typed backend, forwarding local port 5555 to guest port 22. Then we can do:

to have SSH access to guest after its network setup (don't forget to turn off firewalls if there is any in the guest or host).

How to use tap with a wireless adapter on the host

How to disable network completely

If you don't specify any network configuration options, then QEMU will create a SLiRP user network backend and an appropriate virtual network device for the guest (eg an E1000 PCI card for most x86 PC guests). If you don't want any networking at all you can suppress this default with:

The more general option -nodefaults also suppresses the default networking configuration, as well as the creation of several other default devices.

Setting up taps on Linux

For Linux with iproute2 and tap/tun support, this can be configured as below, and assumes the reader has experience using iproute2 (at least ip-addr and ip-link). Take note of the host's physical devices' configuration, as the bridge created will become the new endpoint for the physical device. Note that this WILL cause the host's networking on that physical device to go out, possibly requiring a reboot for remote systems!

At this point, the bridge works, but is not usable as it does not have an IP address. For reassigning the physical device's addresses for the bridge to be usable:

This can be automated with a shell script to setup tap networking on remote hosts; as mentioned above, connection will be lost upon setting the physical device's master to a bridge.

Please note that the newly-created tap device's link may need to be set to UP via ip-link after a virtual machine has been started. Furthermore, as a bridge device basically acts as the new endpoint for a physical device, most normal networking commands, such as a DHCP client or packet sniffer, must be ran on the bridge instead of the physical device. Creating multiple bridges per interface is known (anecdotally) to be problematic; instead, create a tap for each virtual machine using a single bridge for each physical device to be used.

QEMU previously used the -net nic option instead of -device DEVNAME and -net TYPE instead of -netdev TYPE. This is considered obsolete since QEMU 0.12, although it continues to work. The legacy syntax to create virtual network devices is:

You can use -net nic,model=? to get a list of valid network devices that you can pass to the -net nic option. Note that these model names might be different from the -device ? names and are therefore only useful if you are using the -net nic,model=MODEL syntax.

The obsolete -net syntax automatically created an emulated hub with ID 0 (used to be called a "VLAN" in older versions of QEMU, for virtual LAN) that forwards traffic from any device connected to it to every other device on the "VLAN". If you need more than one hub in recent versions of QEMU, you can do this with the "hubport" backend, e.g. by using -nic hubport,hubid=1.

If having problems, open the TCP/IP control panel. Under "Connect via:" select Ethernet. Under "Configure" select "Using DHCP Server". Close the control panel. Wait a few seconds then try opening it again. The fields in the window should have been auto-populated.

Starting with QEMU 2.11, the SunGEM NIC can be used. Open the System Preferences, go to the Network pane. You should see a dialog box telling you it has found a new network interface card. Click the Ok button. Click the 'Apply Now' Button at the bottom of the window. The fields in the TCP/IP tab should populate.

Open System Preferences and go to the Network pane. Select the Ethernet Adapter from the "Show" drop down menu. From the TCP/IP tab, push the Apply Now button at the bottom. This will make the nic work.

Windows will automatically detect and use the NIC.