QMP (QEMU Machine Protocol) is an API provided by QEMU to allow applications to operate a running QEMU instance. QMP is a JSON based protocol and features the following

QMP can be started on a number of interfaces. This makes it flexible for applications to connect to. The interfaces include UNIX sockets, TCP sockets, and STDIO. Some of the interfaces used by the developers to connect include socat, telnet and qmp-shell. The qmp-shell is a simple python interface that has a basic understanding of the protocol provides little more features compared to the standard tools like socat and telnet. Its features include simple command completion, readline features, and a simple syntax checker. Some of the shortcomings of this tool are as follows

The aim of this project is to build a versatile TUI interface that can provide all the lacking features of qmp-shell. This will replace the qmp-shell and will one of the major tools for issuing QMP commands. The initial goal is to build a TUI that can connect to QEMU and issue QMP commands, but the long-term goal is to augment this interface with more features related to testing and debugging.

The main features of this interface will be

The rest of the auxiliary features described below will be added in the future. All this is possible through the AQMP (Asynchronous QMP) library built by John Snow.

The initial prototype is expected to look something similar to this. 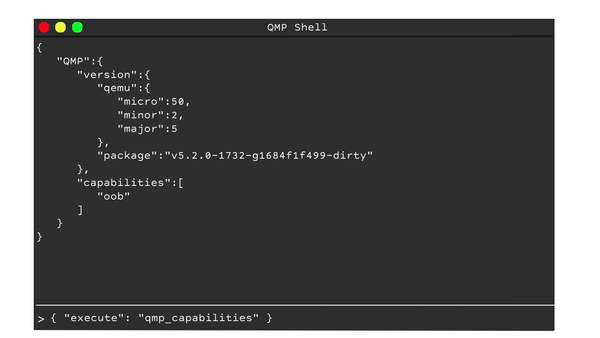 (More will be added as used)

The initial prototype is expected to look like the TUI shown in the above image. It should be capable of receiving asynchronous events, displaying the events (Should also allow scrolling), and issuing the commands. It should also be capable of syntax highlighting the JSON messages to make them easier to read. It should also contain a status bar that notifies it of any disconnections or other unexpected events from the server.

We will be using the Asyncio event loop in urwid, this will allow for getting inputs from the user and messages from the server without blocking the loop. The main widget of the TUI is the urwid Frame. The frame widget consists of three components, the header, footer, and body. The header will contain information like the current window name or the TUI name, this component is optional. The footer will contain the status bar that notifies events like disconnections or errors from the server-side. The body will host an urwid Listbox which will display all the messages sent/received. With these features, one should have a primitive TUI that is capable of connecting to, issuing, and displaying the messages to/from the QEMU instance.