Status: RDMA moved out of experimental status in QEMU 2.0. Status: RDMA Support was merged in QEMU 1.6. Please clone QEMU to use it.

RDMA helps make your migration more deterministic under heavy load because of the significantly lower latency and higher throughput over TCP/IP. This is because the RDMA I/O architecture reduces the number of interrupts and data copies by bypassing the host networking stack. In particular, a TCP-based migration, under certain types of memory-bound workloads, may take a more unpredicatable amount of time to complete the migration if the amount of memory tracked during each live migration iteration round cannot keep pace with the rate of dirty memory produced by the workload.

RDMA currently comes in two flavors: both Ethernet based (RoCE, or RDMA over Converged Ethernet) as well as Infiniband-based. This implementation of migration using RDMA is capable of using both technologies because of the use of the OpenFabrics OFED software stack that abstracts out the programming model irrespective of the underlying hardware.

Refer to openfabrics.org or your respective RDMA hardware vendor for an understanding on how to verify that you have the OFED software stack installed in your environment. You should be able to successfully link against the "librdmacm" and "libibverbs" libraries and development headers for a working build of QEMU to run successfully using RDMA Migration.

There have been reports from other companies that Mellanox has a "special" OFED (openfabrics) distribution of their own which is not completely binary compatible with the upstream OpenFabrics distribution. (Some functions have different return values than the standard openfabrics libraries).

Testing so far has shown no problems using the vanilla upstream OpenFabrics RDMA libraries - so if you are experiencing problems with the migration using a Mellanox-specific OFED distribution, please remove it and switch to the regular OpenFabrics software.

(The author has Mellanox hardware and it works just fine with upstream OpenFabrics libraries).

Use of RDMA during migration requires pinning and registering memory with the hardware. This means that memory must be physically resident before the hardware can transmit that memory to another machine. If this is not acceptable for your application or product, then the use of RDMA migration may in fact be harmful to co-located VMs or other software on the machine if there is not sufficient memory available to relocate the entire footprint of the virtual machine. If so, then the use of RDMA is discouraged and it is recommended to use standard TCP migration.

Experimental: Next, decide if you want dynamic page registration. For example, if you have an 8GB RAM virtual machine, but only 1GB is in active use, then enabling this feature will cause all 8GB to be pinned and resident in memory. This feature mostly affects the bulk-phase round of the migration and can be enabled for extremely high-performance RDMA hardware using the following command:

Performing this action will cause all 8GB to be pinned, so if that's not what you want, then please ignore this step altogether.

On the other hand, this will also significantly speed up the bulk round of the migration, which can greatly reduce the "total" time of your migration. Example performance of this using an idle VM in the previous example can be found in the "Performance" section.

Note: for very large virtual machines (hundreds of GBs), pinning all all of the memory of your virtual machine in the kernel is very expensive and may extend the initial bulk iteration time by many seconds, and thus extending the total migration time. However, this will not affect the determinism or predictability of your migration you will still gain from the benefits of advanced pinning with RDMA.

First, verify QEMU can see the libraries for your RDMA, infiniband, or OpenFabrics installation:

If that doesn't work, then QEMU cannot see your librdmacm or libibverbs libraries. You must solve that first on your own.

Next, set the migration speed to match your hardware's capabilities:

Then, on the destination machine, add the following to the QEMU command line:

Finally, perform the actual migration on the source machine:

To use libvirt, first make sure /etc/libvirt/qemu.conf has the following permissions setup correctly for your infiniband hardware:

The "rdma-pin-all" is of course totally optional.

EFFECTS of memory registration on bulk phase round:

For example, in the same 8GB RAM example with all 8GB of memory in active use and the VM itself is completely idle using the same 40 gbps infiniband link:

These numbers would of course scale up to whatever size virtual machine you have to migrate using RDMA.

Enabling this feature does *not* have any measurable affect on migration *downtime*. This is because, without this feature, all of the memory will have already been registered already in advance during the bulk round and does not need to be re-registered during the successive iteration rounds.

In the (rather old) figure below, "STOP Obj" simply means "downtime". Don't let that confuse you. 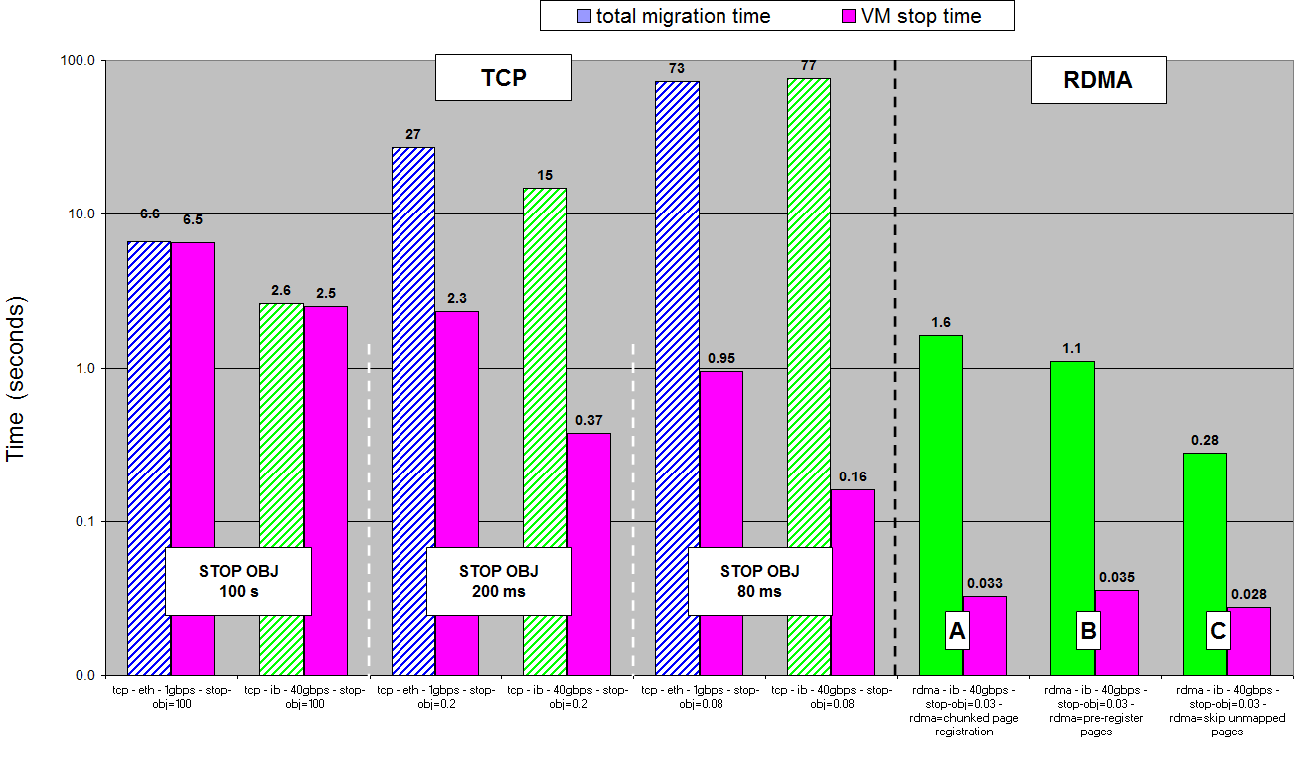 Migration with RDMA is separated into two parts:

"Everything else" is transmitted using a formal protocol now, consisting of infiniband SEND messages.

RDMA messages are much easier to deal with. Once the memory on the receiver side is registered and pinned, we're basically done. All that is required is for the sender side to start dumping bytes onto the link.

(Memory is not released from pinning until the migration completes, given that RDMA migrations are very fast.)

SEND messages require more coordination because the receiver must have reserved space (using a receive work request) on the receive queue (RQ) before QEMUFileRDMA can start using them to carry all the bytes as a control transport for migration of device state.

To begin the migration, the initial connection setup is as follows (migration-rdma.c):

At this point, we define a control channel on top of SEND messages which is described by a formal protocol. Each SEND message has a header portion and a data portion (but together are transmitted as a single SEND message).

The 'Repeat' field is here to support future multiple page registrations in a single message without any need to change the protocol itself so that the protocol is compatible against multiple versions of QEMU. Version #1 requires that all server implementations of the protocol must check this field and register all requests found in the array of commands located in the data portion and return an equal number of results in the response. The maximum number of repeats is hard-coded to 4096. This is a conservative limit based on the maximum size of a SEND message along with emperical observations on the maximum future benefit of simultaneous page registrations.

The 'type' field has the following command values:

A single control message, as hinted above, can contain within the data portion an array of many commands of the same type. If there is more than one command, then the 'repeat' field will be greater than 1.

After connection setup, message 5 & 6 are used to exchange ram block information and optionally pin all the memory if requested by the user.

After ram block exchange is completed, we have two protocol-level functions, responsible for communicating control-channel commands using the above list of values:

All of the remaining command types (not including 'ready') described above all use the aformentioned two functions to do the hard work:

Current version of the protocol is version #1.

The same version applies to both for protocol traffic and capabilities negotiation. (i.e. There is only one version number that is referred to by all communication).

librdmacm provides the user with a 'private data' area to be exchanged at connection-setup time before any infiniband traffic is generated.

There is no data portion of this header right now, so there is no length field. The maximum size of the 'private data' section is only 192 bytes per the Infiniband specification, so it's not very useful for data anyway. This structure needs to remain small.

This private data area is a convenient place to check for protocol versioning because the user does not need to register memory to transmit a few bytes of version information.

This is also a convenient place to negotiate capabilities (like dynamic page registration).

If the version is invalid, we throw an error.

If the version is new, we only negotiate the capabilities that the requested version is able to perform and ignore the rest.

Currently there is only *one* capability in Version #1: dynamic page registration

These two functions are very short and simply use the protocol describe above to deliver bytes without changing the upper-level users of QEMUFile that depend on a bytestream abstraction.

Finally, how do we handoff the actual bytes to get_buffer()?

Again, because we're trying to "fake" a bytestream abstraction using an analogy not unlike individual UDP frames, we have to hold on to the bytes received from control-channel's SEND messages in memory.

Each time we receive a complete "QEMU File" control-channel message, the bytes from SEND are copied into a small local holding area.

Then, we return the number of bytes requested by get_buffer() and leave the remaining bytes in the holding area until get_buffer() comes around for another pass.

If the buffer is empty, then we follow the same steps listed above and issue another "QEMU File" protocol command, asking for a new SEND message to re-fill the buffer.

At the beginning of the migration, (migration-rdma.c), the sender and the receiver populate the list of RAMBlocks to be registered with each other into a structure. Then, using the aforementioned protocol, they exchange a description of these blocks with each other, to be used later during the iteration of main memory. This description includes a list of all the RAMBlocks, their offsets and lengths, virtual addresses and possibly includes pre-registered RDMA keys in case pinning was enabled, otherwise not.

Pages are migrated in "chunks" (hard-coded to 1 Megabyte right now). Chunk size is not dynamic, but it could be in a future implementation. There's nothing to indicate that this is useful right now.

When a chunk is full (or a flush() occurs), the memory backed by the chunk is registered with librdmacm is pinned in memory on both sides using the aforementioned protocol. After pinning, an RDMA Write is generated and transmitted for the entire chunk.

Chunks are also transmitted in batches: This means that we do not request that the hardware signal the completion queue for the completion of *every* chunk. The current batch size is about 64 chunks (corresponding to 64 MB of memory). Only the last chunk in a batch must be signaled. This helps keep everything as asynchronous as possible and helps keep the hardware busy performing RDMA operations.

Infiniband has what is called a "Reliable, Connected" link (one of 4 choices). This is the mode in which we use for RDMA migration.

If a *single* message fails, the decision is to abort the migration entirely and cleanup all the RDMA descriptors and unregister all the memory.

After cleanup, the Virtual Machine is returned to normal operation the same way that would happen if the TCP socket is broken during a non-RDMA based migration.

1. Currently, 'ulimit -l' mlock() limits as well as cgroups swap limits are not compatible with infinband memory pinning and will result in an aborted migration (but with the source VM left unaffected).

2. Use of the recent /proc/<pid>/pagemap would likely speed up the use of KSM and ballooning while using RDMA.

3. Also, some form of balloon-device usage tracking would also help alleviate some issues.

5. Use LRU to provide more fine-grained direction of UNREGISTER requests for unpinning memory in an overcommitted environment.

6. Expose UNREGISTER support to the user by way of workload-specific hints about application behavior.