This feature was developed as part of Google_Summer_of_Code_2019

Status: Vanderson M. do Rosario <vandersonmr2@gmail.com> (vanderson on #qemu IRC) is working on this project for 2019 GSoC.

Summary: in most applications, the majority of the execution time is spent in a very small portion of code. Regions of a code which have high-frequency execution are called hot while all other regions are called cold. As a direct consequence, emulators also spent most of their execution time emulating these hot regions and, so, dynamic compilers and translators need to pay extra attention to them. To guarantee that these hot regions are compiled/translated generating high-quality code is fundamental to achieve a final high-performance emulation. Thus, one of the most important steps in tuning an emulator performance is to identify which are the hot regions and to measure their translation quality.

Improving the code generation of the TCG backend is a hard task that involves reading through large amounts of text looking for anomalies in the generated code. It would be nice to have tools to more readily extract and parse code generation information. This would include options to dump:

For that reason, we collect all this information dynamically for every TB or for a specific set of TBs and store it on TBStatistics structures. Every TB can have one TBStatistics linked to it by a new field inserted in the TranslationBlock structure[2]. Moreover, TBStatistics are not flushed during tb_flush and they survive longer being able to be relinked to retranslated TBs using their keys (phys_pc, pc, flags, cs_base) to matches new TBs and their TBStats.

When a TB is going to be generated by calling tb_gen_code, we check if tbstats collection is enabled and if the current TB is not uncached. If so, we call tb_get_stats which either creates a new TBStatistics for that specific pc, phys_pc and flag or returns an already existing one (stored in a qht hash table in TBContext). Then, we get the default flags set through HMP or -d tb_stats argument. This default value will be used to set what stats are going to be collected for that TB.

To collect the stats for the TBStatistics, different parts of the QEMU source code were changed. We list here how we collected each information for each field.

To collect the execution count of each TB, we instrument the begin of each one of them, adding a call to a helper function called exec_freq. This instrumentation is done in the gen_tb_exec_count function. The exec_freq helper receives the address of the TBStatistic structure linked to the TB.

The helper function access the field executions.total of the TBStatistic structure (which address was passed as a parameter) and increment it atomically counting one more execution of the TB. This is done on every execution start of a TB.

TBs can also be executed atomically and we count how many times this is done by incrementing the executions.atomic field every time cpu_exec_step_atomic is called.

We also count how many times a TB spans by atomically incrementing the translations.spanning field after the span.

The guest instructions are already counted in the DisasContextBase (db->num_insns) in the translator_loop, so we simply add it to the code.num_guest_inst.

QEMU does not have any specific way of couting the number of host instructions. Moreover, we realize that implementing such function would need to modify many target-specific code and it would be unfeasible for this GSoC. So, instead, we count the size in bytes of the generated host code that is already calculated in the tb_gen_code function.

To count the number of TCG instructions we need only to iterate over the ops in the TCGContext and them store the result in the code.num_tcg_inst. We do this twice, before and after aplying the optimizations, filling num_tcg_ops and num_tcg_ops_opt.

We increment the code.spills counter after a load is generated to deal if a register spill in the function temp_sync.

Other fields in TBStatistics including the ones related to the measurement of time all came from an old global scheme of profiling of QEMU. This profiling was controlled by a CONFIG_PROFILER flag that should be set during compilation. We decided that all statistics should now concentrate in the TBStatistics structure and there was no reason to maintain two mechanisms of profiling. Moreover, instead of collecting these statistics globally we now collect them per TB, having more information and still being able to reconstruct the global profiling by summing up all TB stats.

In each region of code where there was a #ifdef CONFIG_PROFILER follow by updates of global statistics, we changed to an update of the TB stats as shows the following example:

There are two ways of controlling the collection of statistics: before execution by using the -d tb_stats command argument or by using the tb_stats HMP command in the QEMU monitor. In both, you can choose which will be the default level of profiling collection of the tbs (exec_stats, jit_stats, jit_time, all).

Further, the HMP tb_stats command can be also used to pause, stop or restart the profiling during the execution in system mode.

To dump a list TBs stats, the HMP command "info tb-list" can be used. "info tb-list" receive as parameter the number of tbs to be dumped and which metric it should be sorted by: hotness, hg (host/guest), or spills. Follows an example of the output of three TBs stats sorted by hotness (execution frequency):

If necessary to iteratively examine one of this listed tbs the info tb id command can be used, where the id comes from the TBs listed by "info tb-list". The following example shows the result of dumping the guest instructions of tb with id 1.

info tb only shows information of one TB, but info cfg id can be used to create a .dot representing the Control Flow Graph (CFG) of the neighborhood of a TB. Each node in the graph has the guest code of the TB and its execution frequency with the colors of the nodes representing its relative hotness in the neighborhood. The image below shows an example of such CFG. 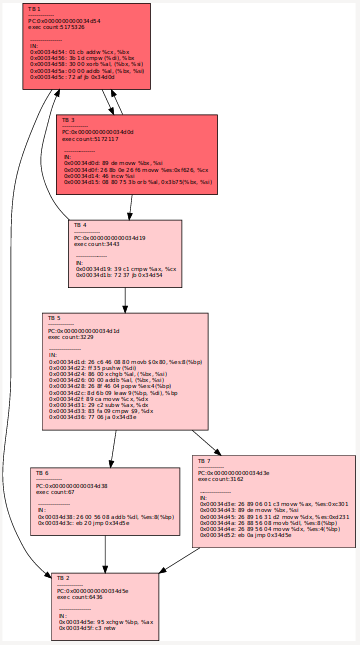 Finally, there is an option to dump not the "n" hottest blocks but all necessary hot blocks to achieve m% of the total execution counting (info coverset m). This is a useful metric to understand the execution footprint of a program. More execution dense applications will have a smaller number of blocks to achieve m% of the execution while sparse ones will have a larger number. Dynamic compilers normally have better performance with applications with a small number of blocks needed to achieve the 90% coverset.

To understand the overhead of collecting these statistics we executed some benchmarks using four configuration variations in the qemu-x86-64-linux-user:

All values below are the median of 10 executions and they are all slowdowns in relation to the baseline value. 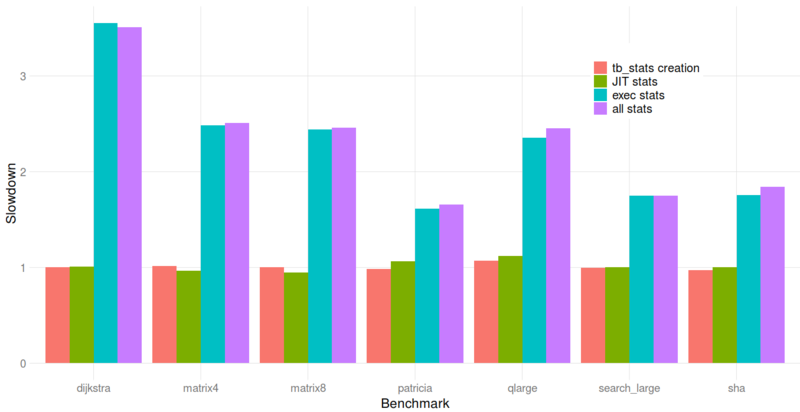 Another tool added to QEMU to help investigate its performance was adding the option to dump a jitdump file using the command line argument -perf. This jitdump file can be used by Linux Perf to enhance the report of JITed code. Using such enhancement we can have the execution time relative percentage of a TB together with its guest PC. Moreover, we can explore the host code of the TB and observe which host instructions took more time in the execution. Both examples can seem in the following pictures: 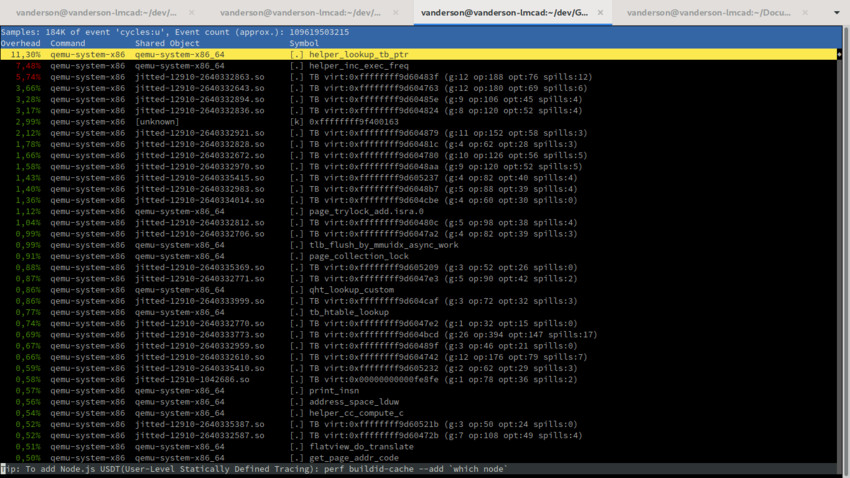 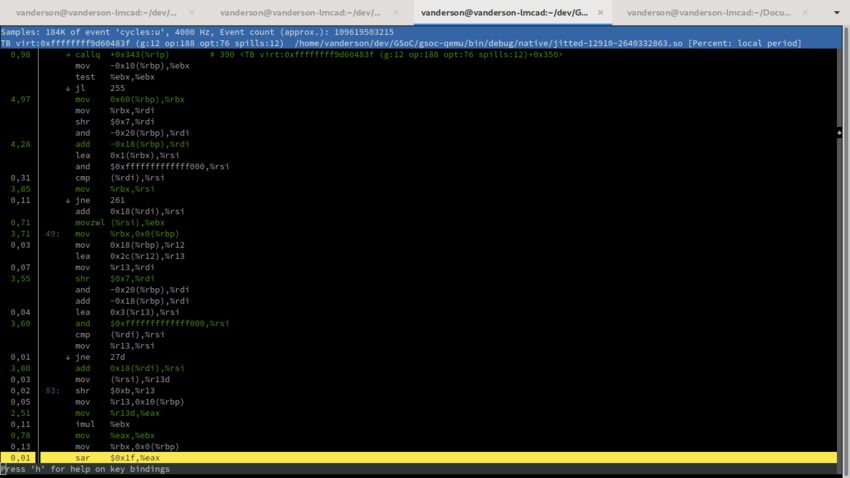 To use perf with QEMU is as simple as using the following three commands:

Future work would include: